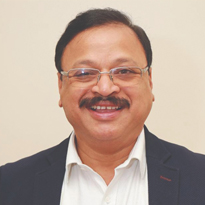 Mr. Ravindra Boratkar has been elected as President of MEDC. He was elected at 57th annual general meeting (AGM) of Maharashtra Economic Development Council (MECD).

Mr. Ravindra Boratkar started his career with Newspaper as a Management Trainee and then set up his own Advertising agency in 1988, which has won many awards and accolades. He has played a key role in successful transition of company from Advertising to the Sci Tech Event Management Company. He has successfully established the flagship event of Indian Science Congress and has strengthened all other initiatives in R&D, Agriculture and other cutting edge technologies. He also serves as a board member of Solvent Extraction Company and A composite project of Sugar, Power, Ethanol and Bio-Fertilisers. He serves as the Chairman of the cooperative society which runs a chain of retail stores. He is also on the board of a reputed vernacular daily newspaper from Maharashtra. Mr. Ravindra Boratkar is Science Graduate with Masters in Business Administration.

With his superb qualities in Public Relations and Networking, he also looks after the Corporate Liaison of the group. He enjoys good relations with Industry, Bureaucrats and Scientific Fraternity which has helped organisation to facilitate Business Partnerships and create better opportunities for innovators, entrepreneurs and scientists to network and collaborate.

We are very excited about the new role and looking forward to it.